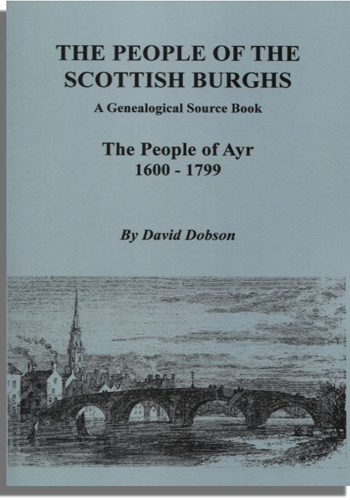 During the 17th century, when substantial numbers of Scots crossed over to Ireland to settle, much of this traffic went via the port of Ayr. At the same time, trading links were established with the West Indies and the Thirteen Colonies, which facilitated emigration there.Many of the men listed in this book were burgesses of Ayr. Most of the entries herein provide a man’s name, occupation, a date, and the source. In many instances we are also given the name of at least one or more relatives, date of birth and/or death, names of witnesses, education, or more. This book, with references to between 1,500 and 2,000 inhabitants, does not claim to be an exhaustive list of all the residents of Ayr during the period but rather an illustration of some of the data found in available records. Ayr is important as a link with the settlement of Ulster in the 17th century and the subsequent emigration of the Scotch-Irish to colonial America in the 18th century, as well as a direct link between Scotland and the Americas.