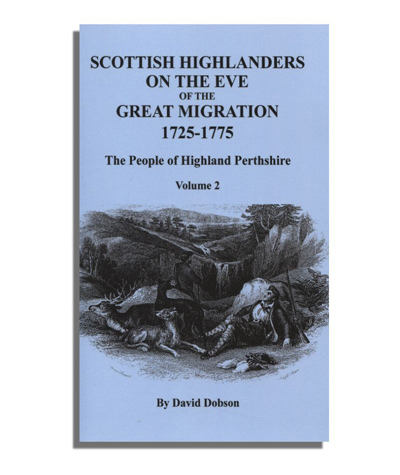 Scottish Highlanders on the Eve of the Great Migration, 1725-1775: The People of Highland Perthshire. Volume 2

The earliest emigrants from Highland Perthshire were Jacobite prisoners transported to South Carolina, Maryland, and the West Indies in 1716 and 1746. The next group from Highland Perthshire were soldiers recruited for regiments, particularly the Black Watch, that fought in the French and Indian Wars; some of whom settled in the colonies in the aftermath. Possibly influenced by the settlement of these soldiers, Perthshire families emigrated from Greenock to New York in 1775 to settle on the frontier. Most of them tended to be Loyalists at the outbreak of the American Revolution, and they consequently moved to Canada. While this book is not a comprehensive directory of all the people of Perthshire during the mid-18th century, it does pull together references on about 2,000 additional 18th-century inhabitants not referenced in Volume 1. In all cases Mr. Dobson gives each Highlander’s name, a place within Perthshire (birth, residence, employment, etc.), a date, and the source. In many cases we also learn other details, such as date of death, the identities of relatives, the individual’s employment, vessel traveled on, later whereabouts, etc.