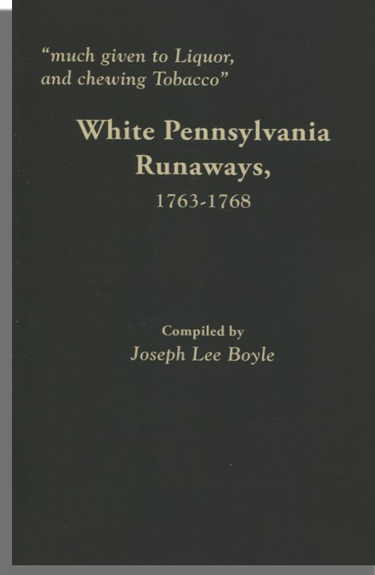 “Much given to Liquor, and chewing Tobacco.” White Pennsylvania Runaways, 1763-1768

Runaway servants were not an uncommon phenomenon in the 18th century. One source estimates that between 20-25% of indentured servants fled their masters. From the genealogists standpoint, this presents a methodological problem since it was in the runaways best interest to conceal his/her identity after making a successful getaway. In other words, even if the runaway kept the same name, it is quite likely that the link to his original residence in America and to his country of origin was lost–lost, that is, unless his/her identity is uncovered in the thousands of runaway ads placed in colonial newspapers by the disgruntled “owners.” The work at hand marks the seventh collection of runaway servant ads for the Chesapeake region compiled by Joseph Lee Boyle and the third volume of Pennsylvania advertisements. For this compilation the author has listed only white male and female runaways; however, for those ads where white and black runaways are listed together, blacks are so identified in the index at the back of the volume.