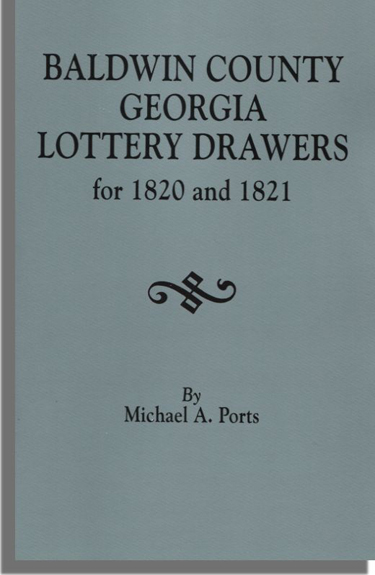 In 1820 and again in 1821, the State of Georgia conducted the Third and Fourth Land Lotteries to distribute the former Cherokee and Creek lands within the state that those tribes had ceded to the federal government between 1814 and 1818. The records of those lotteries for Baldwin County, Georgia, in particular, are available on microfilm at the Georgia Department of Archives and History. The lottery rolls identify both the persons eligible to participate in the two lotteries and the names of the Fortunate Drawers, the persons who actually won title to the former Indian lands. The arrangement of the lottery records themselves is according to the old Baldwin County militia districts, and thereunder by the names of militia officers. Mr. Ports has included a useful history of the lotteries–including eligibility requirements, fee structure, average lot size, etc.–and a 1952 map of the militia districts to aid researchers in more precisely locating the origins of potential ancestors. Baldwin County residents who ultimately made their way to the former Indian lands would remove to one of the seven new Georgia counties–Appling, Early, Gwinnett, Habersham, Hall, Irwin, and Walton–now comprising those lands. Mr. Ports transcription includes the residents of Baldwin County entitled to draw from the five militia districts commanded by Captains Dozier, Ellis, Haws, Norris (or Cousins), and Russell.