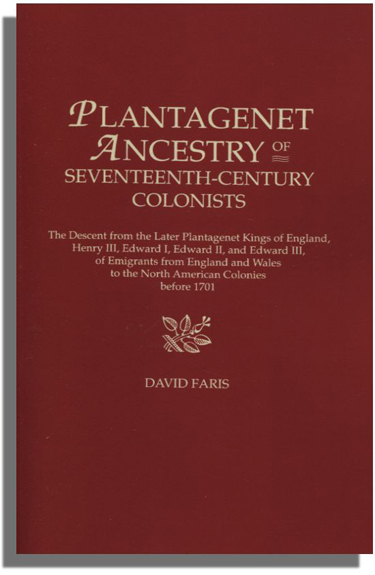 Prepared by David Faris, who had assisted Mr. Sheppard with the last two editions of “Ancestral Roots, Plantagenet Ancestry” provides the descent from the later Plantagenet kings of England (Henry III, Edward I, Edward II, and Edward III) of more than one hundred emigrants from England and Wales to the North American colonies before 1701, including many colonists not included in former editions of “Ancestral Roots.” All 137 lines in this new volume include the consecutive generations of married couples with the spouse of Plantagenet descent on the left margin, each such individual being the child of the previous generation. Generation 1 names the parents of an emigrant, and the preceding generations are numbered back in time to the Plantagenet kings. Considerable biographical information is provided together with documentation for each generation.